Sunflower Possibilities is a short booklet celebrating sunflowers. The 24 photographs, all original, are accompanied by text exploring the sunflower's possibilities. 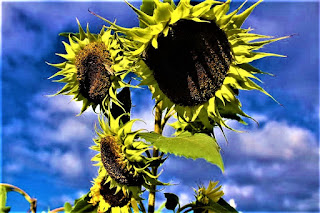 If you want your free copy, email rlewing@gmail.com, with Sunflower Possibilities as the subject. Have a great day.
at October 29, 2018 No comments:

This spot gets sun and heat throughout the season. It is too close to the driveway to plant food, but sunflowers and lilies will transform it, next season.

I've dumped the soil from the container plants here and will top up with manure and soil in the spring. 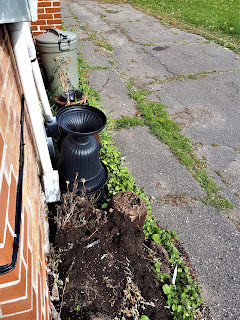 I've almost put the garden to bed for the winter. There is only one task left, that is to get the new garden bed between the house and the driveway prepared.

I will plant sunflowers and fall blooming bulbs here. I will post photos tomorrow. Have a great day.
at October 26, 2018 No comments:

There are a number of things people who live in cities, towns and villages have in common; however, it is likely the most common compliant heard concerns potholes. Why does this matter, well.
Around the world people are moving into urban centres. The pressure this puts on urban resources can be readily seen, potholes perhaps being the most visible evidence of how, in far too many urban centres, the municipal infrastructure is crumbling.
There are a number of ways various cities have responded to environmental concerns. City planners have an opportunity to revitalize low income areas by embracing urban agricultural enterprises. Urban agricultural enterprises go beyond the traditional community garden as they do more than green a space and enable people to grow some of their own food.
When looking for land that is appropriate for urban agricultural enterprises lets not forget rooftops. If the rooftops can support the weight then the space that may available for urban food production expands.
There are other advantages to greening the roof with gardens, for example, native plants can be used and thus preserved.
However, let’s get back to the ground level. If you drive, or for that matter ride in someone else’s car, you know about potholes. Car owners are taking a hit in their pocket book because of all too frequent encounters with them.
Around here, taxi drivers are avoiding certain streets because the potholes are too prevalent. Fortunately, because the cabs use a flat rate system, these detours do not cost the passenger, but can result in a longer ride and thereby eat into the driver’s time.
Sidewalks are not much better. They are cracked and in a very poor state of repair. The climate here does not help. Personal injury does happen. I have tripped more than once, fortunately, no obvious injury resulted, but others have hurt backs and knees.
Municipalities are forced to devote a significant percentage of their budget to repair the crack and potholes. The principal way cities raise funds to pay for roads, etcetera, is to raise taxes and in this day and age it is an unwise political move to raise taxes. So how do they pay for the needed repairs?
They can cuts costs, but this usually results in a loss of services and jobs, neither is a desirable outcome.
There is a way municipalities can reduce operating costs and perhaps even lower taxes and that is twofold.
The first is to reduce energy use, that is developing a municipal energy conservation plan.
The second part is to incorporate renewable energy in the energy mix. Power the municipal office with the appropriate alternative energy and use the saving to pay for road and sidewalk repair. Other municipal buildings, sports arenas, conference centres, for example could also adopt, in phases, if necessary, renewable energy.
There is an initial expenditure, but wise investment in appropriate renewable technology can have a short pay back period. Money save can then be devoted to fixing the cracks and potholes.
Now, a wise municipal government would be certain that some of the money saved on the energy bill would go towards tax reduction.
Crack and potholes are visible evidence of urban decay, but there is a way to reduce and eliminate that evidence and it all begins with incorporating appropriate renewable energy into the urban environment.
at October 24, 2018 No comments: 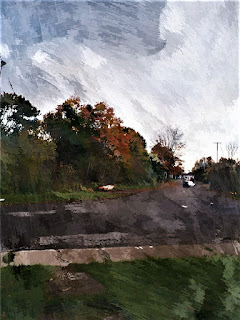 having fun with Sketchcamera
at October 22, 2018 No comments:

A friend and I, on our way back from Ottawa and before we hit Arnprior, stopped at a Roadside Veg&Fruit Stand, had a great chat with the owner and bought everything here but the apples which we had just bought from the orchard. 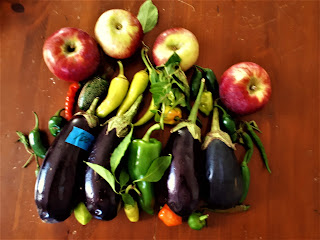 We are all familair with this sentence, "There's No Place like Home." Does this sentiment still ring true?

The Value of Pollinators

All elements of an ecosystem are important to the functioning of that ecosystem. Remove one element and the system will need to make adjustments. The effect of that adjustment may often not be known until after it has happened.
It may be positive or negative, from a human standpoint, but we cannot look at nature from a human standpoint only. Why?
Well, ecosystems are complex, possibly too complex for us to be able to understand all the connections and actions and interactions that takes place within them.
If we do not know what will happen if something changes, it makes no sense to rush in and make those changes.
Now, with bees and honey bees, in particular we know that over one-third of our food supply relies upon them for pollination services and we know that pollination is essential for the reproduction of the plants the bees service.
The honey bee is a major pollinator of many of our food crops, almonds, apples, avocados, blueberries, cantaloupes, cherries, cranberries, cucumbers, sunflowers, watermelon and many other crops all rely on honey bees for pollination.
So if honey bees disappear and we do not find replacements that can do the work they do then foods that we take for granted will decrease in supply and increase in price.
The pollination service provided by insect pollinators, bees mainly, was €153 billion (euros) in 2005 for the main crops that feed the world. This figure amounted to 9.5% of the total value of the world agricultural food production.
The main reason that the honey bees is important for our world is as simple as this; if the honey bee does not pollinate the crops, the crops do not grow and produce the food that gets harvested and brought to the store where we buy it and bring it home to feed ourselves and our families.
In other words there is a direct connection between the bees pollinating the crops and our ability to provide food for our families.
at October 10, 2018 No comments:

"The main reasons for global bees-decline are industrial agriculture, parasites/pathogens and climate change. The loss of biodiversity, destruction of habitat and lack of forage due to monocultures and bee-killing pesticides are particular threats for honeybees and wild pollinators." 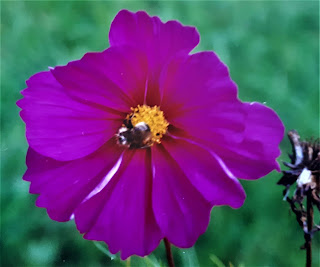 I am working on a podcast, working title "We Are Nature Working" I will talk about the many issues facing us from climate catastro...